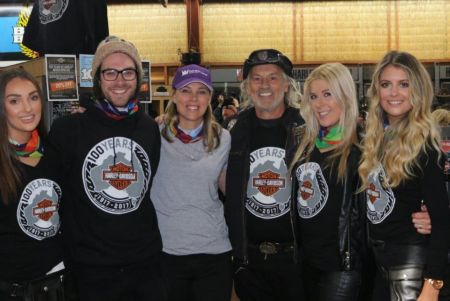 100 Years of Harley-Davidson® in Australia

On Saturday July 29th we celebrated 100 years of Harley-Davidson® in Australia with our Thunder Ride & Party! We had a great turn out of Harley-Davidson® and other motorcycles, riders and pillions that turned out in Beaconsfield Skate Park to Muster for the Ride.   a few hundred Motorcycles roared off down the West Tamar Highway and through the city with people lining the roads to wave the motorcycles on. A big thanks to roads and transport for all their amazing help with the traffic lights so we had a smooth ride. We then arrived back at the dealership for the Show & Shine, BBQ, Live Music, SALES and a fundraiser for the brain cancer foundation.  We raised a great amount of money thanks to all the generous donations, raffle ticket sales and auction purchases. A Huge Thanks to Nici from the Brain Cancer Foundation and Allan from Legends and Hero's Auctions for helping raise the money. Also a HUGE Thanks to Katelyn from Kate's cakes and catering for making our Birthday Cakes and FriedRice Magic for entertaining the crowd. Also Thanks to Simon and Matthew Garwood for the MC work :) and Everyone for attending the event! 100 years ago Harley-Davidson® opened its first dealership - Morgan & Wacker Motorcycles - in Australia, marking its entry into the fabric of Aussie culture. Richardson’s Harley-Davidson® has been a part of the history for nearly 40 years! Simon Hrycyszyn (Richardson) runs the oldest motorcycle dealership in Tasmania, starting in 1978. In November 1978 Simon was appointed Harley-Davidson® Dealer for Tasmania and sold his first new Harley-Davidson®, a 1979 XLCH Sportster. Richardson’s Motorcycles, as it was known then, expanded adding three more tin sheds, all built the same way. 1995 saw Richardson’s Harley-Davidson® expand again into the existing designer store. The styling and design of a Harley-Davidson® is unlike any other motorcycle. Looking back at the releases over the years is like tracing history, from the WLA Flathead from the 40s, to Elvis’ first bike – the KH Sportster in the 50s, or the Duo-Glide in the 60s to the most recently launched Milwaukee Eight engine and highly anticipated electric motorcycle, Livewire.  Bill Davidson, who is also the Vice President, Harley-Davidson® Museum in Milwaukee, said the brand has always had a strong following in Australia, since operations commenced here in 1917. “Not many people realise that Harley-Davidson® opened its doors in Australia just fourteen years after launching in the United States, so the 100 year anniversary this month is one to be celebrated,” Mr Davidson said.  Adding to an incredible collection of bikes in Australia, fans will have the opportunity to win a one-of-a-kind Harley-Davidson® Street Glide® Special signed by Willie G Davidson by purchasing a commemorative pin at www.h-d.com.au/100years to celebrate the milestone. Over the past 100 years, Harley-Davidson® has reinvented itself. Some of the most defining models for the brand consist of the 1936 Knucklehead, which in its era was the first big engine overhead valve motorcycle to the iconic 1957 Sportster. Significant developments were also made with the first evolution powered range, the FXST Softail, followed by V-Rod and then most recently Street – being ahead of the game is what has attracted such a loyal and dedicated fan-base.  In addition to the 100 Year celebrations, there’s a lot for Australian Harley-Davidson® enthusiasts to be excited about, including the global announcement that 100 new models will be released in the next ten years.  Nigel Keough, Managing Director, Harley-Davidson® Australia & New Zealand said, “Since Morgan & Wacker introduced Australians to the Harley-Davidson® brand in 1917, it’s been a part of the cultural landscape of Australia,” he said.  “Australians have an in-built sense of freedom and adventure. Couple this with the ideal riding conditions our country offers, and we have fostered a loyal and close-knit community of committed motorcycle enthusiasts.  Our fans range from 16 to 88 years old, from kids, racers, school teachers, small business owners, movie stars to CEO’s, and celebrating our 100 years would not be possible without them.” Mr Keough said.  As part of the 100 Year Celebrations, Harley-Davidson® has partnered with Cure Brain Cancer Foundation, to help those suffering from the debilitating disease Live Their Legend. Richardson’s Harley-Davidson® will be partnering with the Brain Cancer Foundation selling patches and with Legends and Hero’s to raise money for the charity with a Silent Auction taking place on the day to raise money. Iconic models over the 100 Years: 1) 1903 - Single Cylinder belt drive 3HP 405cc (the first model and only three ever made)  2) 1916-1923 – an 8 Valve Racer 45degree V-Twin 988cc. Top Speed 115mph – Race bred motorcycle that raced against Indian motorcycles on board tracks 3) 1936 Knucklehead EL – 45 degree V-Twin 989cc. This was a new engine platform for H-D 4) 1942 WLA – Vehicle made for military only (WW2)  5) 1948 Panhead FL – New engine platform 45 degree V-Twin 1200cc 6) 1957 XL Sportster – New Sports Model to the line up with a new engine and frame 883cc 7) 1966 FLH Electra-Glide Shovelhead – New Engine recalling the styling cues from the Knucklehead model 8) 1970 XR750 – Flat tracker raced in the US on dirt oval tracks 9) 1971 FX Super Glide – Design penned by Wille G Davidson. New model 10) 1980 FXB Sturgis – Classic Style meets contemporary technology. First belt drive model 11) 1984 Softail – New Evolution engine with all new frame technology 12) 1990 Fatboy – Iconic H-D model introduced for the first time 13) 1995 Road King – Combination of modern engineering with the styling of the 1965 Electra-Glide Panhead 14) 2001 – VRSC V-Rod - The original V-Rod had a 1,131 cubic centimetres (69.0 cu in) Revolution Engine, producing a claimed 115 horsepower (86 kW) at the crank 15) 2015 Street 500 – New H-D for LAM  16) 2017 Street Rod – most recent product launch in Australia