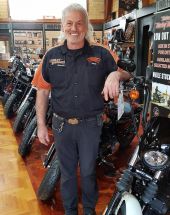 Living life at full throttle, Simon bought the property in 1975 & opened the dealership in 1978. As a trained motor mechanic, he started the business himself with determination & vision that you can see in the Dealership today. Simon still owns the motor from his first Sportster which sits in the Museum, Simon’s 1977 Super Glide & side car which was his first new Harley-Davidson®, is used on special occasions taking elderly or sick people for a ride of their life also sits proudly in his collection. The Shovel trike Simon built in 1980 is now retired to the Museum. Simon mostly rides a 2008 Screamin' Eagle Softail Springer & his newer addition 2016 Road Glide. As you know Simon can’t sit still & always has work in progress, currently building a new warehouse, Iron Horse Bar & Grill extensions & the new accommodation units at the Richardson’s Harley-Davidson® Complex. When asked are you going to retire Simon answers smiling, when I'm dead then you can lay around on your shaft as much as you want. 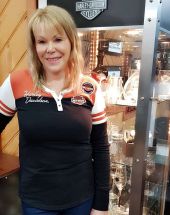 Merilyn has a wide variety of skills, leaving college in Year 11 for a nursing career, then working in Hospitality, at Silver Service Restaurants running bars and later part-owner of a hotel (the California Hotel). Merilyn has been employed full time at Richardson’s Harley-Davidson® since 1996 and part-time prior to this, as well as nursing for Family Based Care. She has completed over 50 P.A.C.E. courses, been to Harley-Davidson® University in Sydney, and attended the Harley-Davidson® Worldwide Model Release in America each year for 10 years. This enables Merilyn to keep up to date with all areas of the Dealership, as Harley® host seminars for Service Department, Sales, Parts & Accessories, Chrome Consulting, and Motor Clothes, as well as a three day Harley-Davidson® Show, which includes all licensed products and Genuine Harley-Davidson® stock. 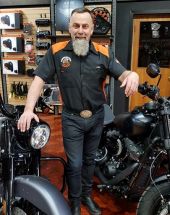 Chris joined the team at RH-D® in 2007 and commenced in the role of Service Manager. In October 2008 he was appointed to the position of Bike Sales Manager. With a great understanding of the Harley-Davidson® range of motorcycles and attention to providing great customer service, Chris has a proven track record. In 2010 Chris was appointed General Manager of RH-D®. Chris’s current ride is a 2008 Screamin Eagle’ Softail Springer.. His passion and knowledge of the brand and motorcycling in general ensures that all customers gets great advice in selecting the model that right for them. Give him a call when you require any information or advice on any new or used bikes and he would be more than happy to assist you in making your dreams of owning a Harley-Davidson® motorcycle come true. 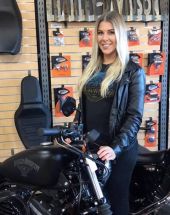 My name is Lindelle; I’ve been a part of the business here at Richardson's Harley-Davidson® for over 10 years, starting out working causally in merchandise on the weekends and moving into the role full time after I completed a Bachelor of Business (Hons) majoring in marketing. I have been involved in many parts of the business, and now manage both the merchandise departments in Launceston & Hobart as well as Marketing and Promotions for Harley® stores, TMW and the Iron Horse. Recently I have added Manager at Tasmanian Motorcycle Warehouse to the mix as well. I enjoy orgainsing all the events at the stores and our big charity fundraiser the Give Me 5 for Kids Bike Raffle. My favourite motorcycle in the current Harley-Davidson® line-up is the Fat Bob. If you are popping in, bring a cupcake and say hi :) 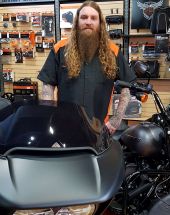 Nathan is the Service Writer in our Launceston store. He also has a great knowledge of parts as he has been around Harley® motorcycles since he was a kid, his father has always had Harley-Davidson® motorcycles. Nathan enjoys working on cars and bikes in his spare time. Nathan rides a 2008 Street Bob he also has a 1974 Iron Head Sportster that he has built from the ground up. Nathan worked for several years in the powder coating industry before joining the team at Richardson’s Harley-Davidson®. Nathan has been with us for four years now, and has a great passion for motorcycles. 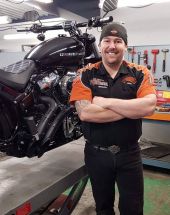 Adam has always had a passion for bikes and cars from an early age, and growing up on a farm has given him plenty of opportunity to explore his love of mechanics. He loves to customise anything with wheels, from Harley® motorcycles to Hilux’s, built not bought is the passion he works by. From making a set of handlebars, to supercharging engines or custom fitting parts, exploring the possibilities is what he loves best. Completing his apprenticeship at Polaris, then being introduced in 2012 to the Harley-Davidson® brand and working with Richardson’s Harley-Davidson® to advance his knowledge and carry out his passion within the motorcycle brand has been a dream come true. Adam bought a new FXDL in 2014, customised with handmade bars, engine and body work, which has now moved on but is on the lookout for an FXR to be his next project!! 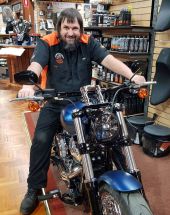 Max has always had an interest in motorcycles from a young age. He has nearly 30 years’ experience as a qualified motorcycle technician. During that time, he spent over 15 years working on Harley-Davidson® motorcycles in our dealership and returned to Richardson’s Harley-Davidson® in 2014 because he missed working on these iconic bikes. He has previously owned a 1973 Iron Head Sportster and is currently riding a 2004 Ultra which has been stripped down and customised. 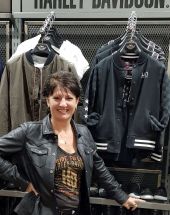 Mandy worked as a seamstress for 33 years, then retail at a clothing store for 2 years. Mandy then took the opportunity to start at Richardson’s Harley-Davidson® in May 2015 in merchandise sales. I'm still doing clothing alterations, and have been a pillion passenger on my husbands bikes since 1986! We bought our first Harley® a 2009 Heritage Softail, and joined the H.O.G Chapter where I became a Lady of Harley®. That’s when riding our Harley® on the mainland trip and rallies with our friends started. While at Richardson’s Harley-Davidson® one day I spotted a girl on a silver VROD and thought "I can be like her!" So 23rd January 2013 on a Suzuki Intruder I got my L’s, but it didn’t take long before I traded it for a 2002 silver VROD on the 18th July 2013. Working at Richardson’s Harley-Davidson® is giving me the opportunity to test other Harley® motorcycles, meet people that enjoy life like I do, and inspire women to become riders! Life is too short. 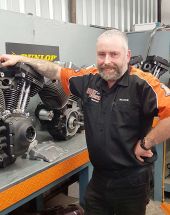 Malcolm started riding motorcycles at the age of 12. He left school at 16 to start working at Imperial Motorcycles, which restored and fixed old English and American motorcycles. Malcolm, while spending most of his time in parts and accessories, would also go into the workshop fixing bikes. The first motorcycle he brought was an old Triumph speed twin 500cc. His first new bike purchase was a 1987 Superglide. Malcolm left the shop in 1996 and moved from New Zealand to the Gold Coast, Australia where he picked up work in a workshop which fixed and customised Harley-Davidson® motorcycles. He has also done a couple of years making 1 ½” to 2” bars at Burleigh Bars. He moved to Tasmania where he had a child and spent a few years diamond drilling at various mines around Australia. He has now returned to his love of working on and around Harley Davidson®. Malcolm is looking forward to working on your Motorcycle in the RH-D® Service Department. 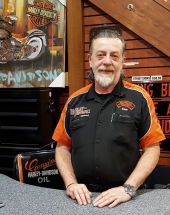 Mark started in the Parts Department at Richardson’s Harley-Davidson® in 1998. He has a vast knowledge of Harley-Davidson® models covering Knucklehead, Panhead, Shovelhead, Ironhead Sportster, Evolution, Evolution Sportster, Twin Cam, Street and the new Milwaukee Eight. He has achieved the Master Level for Parts with Harley-Davidson® University as well as completing many other training modules covering General Merchandise, Service, Warranty, Vehicle Sales and Dealership Management. He worked in the Service Department as a Service Manager for a few years. He then spent some time as our Chrome Consultant prior to heading to Hobart for nearly 4 years to head up the Service and Parts Department when the Hobart Dealership opened in 2011. Mark has owned many different Harley® motorcycles since the early 90’s, including a couple of Sportsters, a 95th Anniversary Fat Boy, a Softail Deluxe and purchased a new CVO Springer Softail in 2008 which he still owns and says he will never sell. 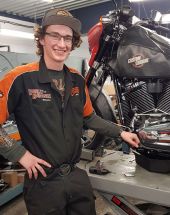 Jake or as everyone calls him Stig, is a recent edition to our hard-working team at Richardson’s Harley-Davidson. His passion for motorcycles started to grow from a young age, where he found himself out on his pw80 ripping up his parents’ front lawn, and for his passion for mechanics, that all began with him helping his grandfather rebuild Datsun 1200 utes. After completing his schooling and finishing year 12, Stig was enthusiastic to start a trade where he could fulfil his passion of motorcycles, after having tried work experience at a couple car dealerships he began to worry about finding a job that he would enjoy, and right as he was giving up hope he was lucky enough to be offered the job of a lifetime and was able to obtain an apprenticeship with the legendary brand and dealership Richardson’s Harley-Davidson. With the guidance and leadership from the team at Richardson’s he will hopefully one day make a trained Harley-Davidson technician. 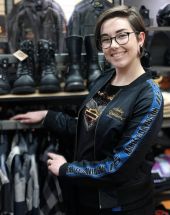 My name is Anna; I joined the team at Richardson’s H-D® in February 2015 looking after the sales of merchandise. Working here over the last 3 ½ years has given me the chance to develop my knowledge of Harley-Davidson® outside of just the merch dept. and I am happy to assist with any enquiry, whether it be merchandise, riding apparel or parts & accessories! I can help you get the right gear for yourself, or for your Harley®! Growing up with family that ride Harley-Davidson® motorcycles I’ve always loved the brand – which means I’m lucky enough to love my job. Before working for Richardson’s I was a designer/shop hand/apprentice at a local tattoo studio in Hobart for just over a year. I have a passion for art and design, and love seeing that sort of creativity in the way that people customise their motorcycles. One of my favourite things about this brand is the people – the passion they have for their motorcycles and their stories, I don’t think you can find anything quite like it elsewhere.

At times we are on the look out for individuals to join us who share our passion and commitment. If this is you and you are interested in working with us, please get in touch