Customisation is what makes Harley-Davidson® unique and sets us worlds apart from our competitors. With Harley®, your custom style possibilities are endless.

YOUR STYLE, YOUR STORY

Whether you want strip-back, blacked-out or a continent-crunching custom tourer, there is a Harley-Davidson® motorcycle that let’s you be more you.

Your Harley® is more than just metal, it is an extension of your personality. From our custom paint and seats to handlebars and wheels, we have thousands of genuine accessories so you can customise your Harley®.

In fact, whatever you dream we can build minimizing your time off the road, come in store to check out the latest accessories and chat to one of our team on how we can build your dream ride.

MAKE YOUR RIDE STAND OUT FROM THE CROWD

Celebrate your individuality with your dream harley-davidson®

At Richardson's H-D we want to share some of our customers style stories.

Growing up surrounded by Harley’s®, it was only a matter of time before I got my own. Although it took much longer than I ever expected.

Having ridden little Honda farm bikes that would throw the chain as quick as they would throw me into a fence since primary school, I didn’t purchase my first road bike (Honda CBR 250RR) until I was 22. I soon after moved to Melbourne and never ended up getting my licence. That bike was sold and it wasn’t until 2016 where I was incentivised to take 2 wheels out on the road by riding a bike on stage as a part of the Buddy Holly stage musical.

Blessed by opportunity, my first LAMS approved experience actually getting on the wide open highway was a Harley-Davidson® Street 500! Which was soon written off in a car accident! I had customised everything I could on my XG500 to look like it's big Mamma – the Harley-Davidson® Low Rider S because as soon as I saw the Low Rider S promo shots, I was instantly in love, it was big, black and bad ass! This was my dream bike! And a far off dream. I thought.

Once I had past the legal requirements to upsize, I quickly visited the Richardson’s Harley-Davidson® team to fantasise and day dream over what could be next... and to my absolute delight and complete surprise, the stars aligned and I ended up with a Low Rider S!

The Low Rider S Dyna model I have was only out for two years and was incredible popular.. For good reason! In saying that, I knew I wanted to make mine unique, standout and mine! That’s the beauty of Harley, customisation and individualism.

We then spent the next few months building and customising this beast!

Which included bringing in a big bore 117 stage 5 kit from America, upgrading to the Elite Intake, Wrapping the 2 in 1 pipes, side mount oil cooler, digital temperature gauge and finishing it off with 266 CAMS and a NOS kit!

I’ve always like the blacked out, streamline but chunky look so for looks, we have changed just about everything we can – or at least what I wanted to.

Everything that was wrinkle black is now gloss black including blacking out the motor and pushrods, dropped it like it’s hot on super low Burley Slammers suspension, extended fork covers and fork brace, LED head light and grille cover, tough tail tidy with slimline indicators front and back, all grips and foot pegs, fatter back tyre, slimline mirrors, orange sparkplug leads and even the gear chain link to gold.

One of the most unique style modifications we have made is taking the separated 2 tacos - revs and speedo into a single multifunction digital taco. This also meant changing the tank console trim.

Whilst there might be a few Low Rider S’s out there.. I like to think mine is still able to turn a few heads. 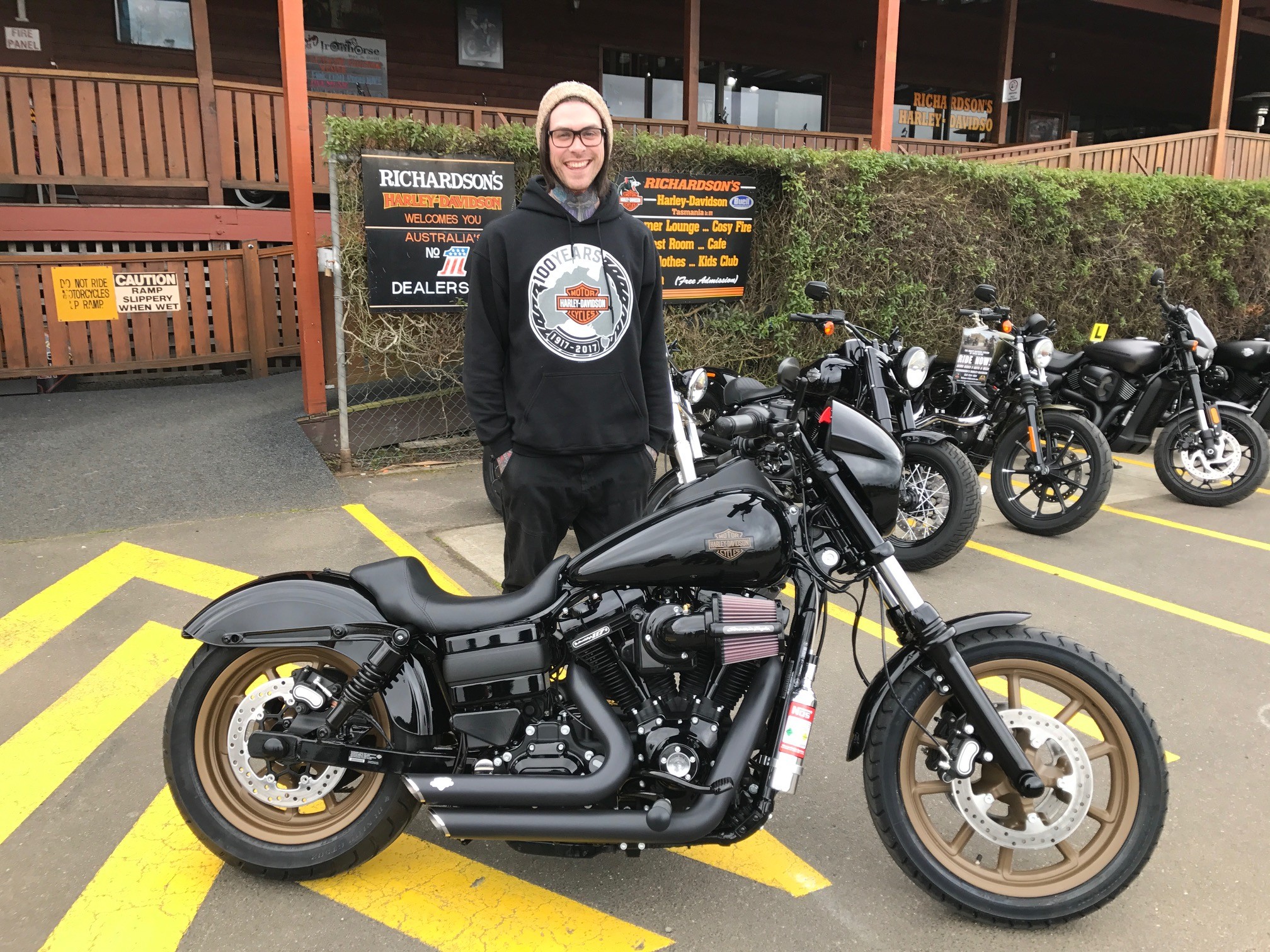 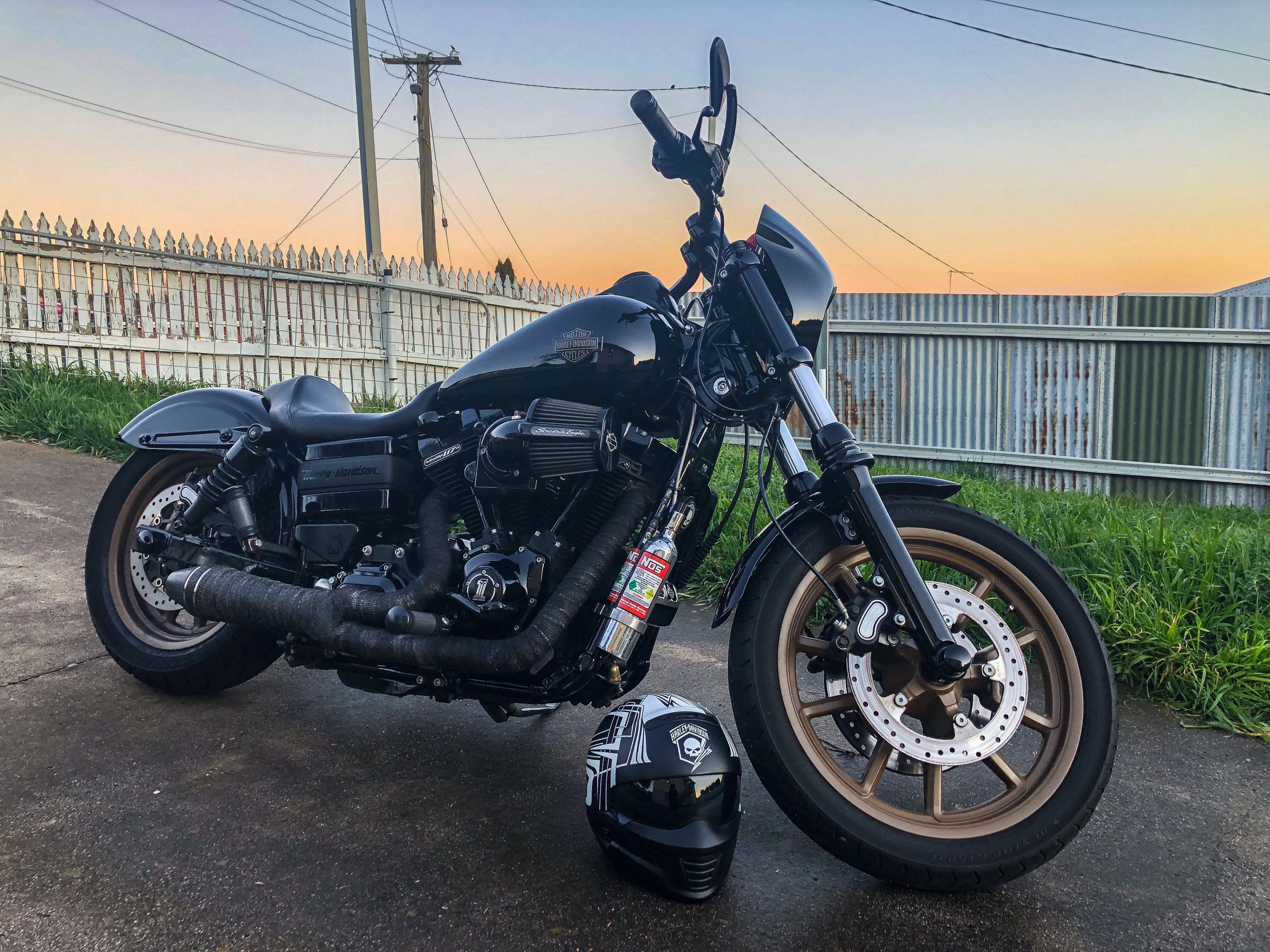 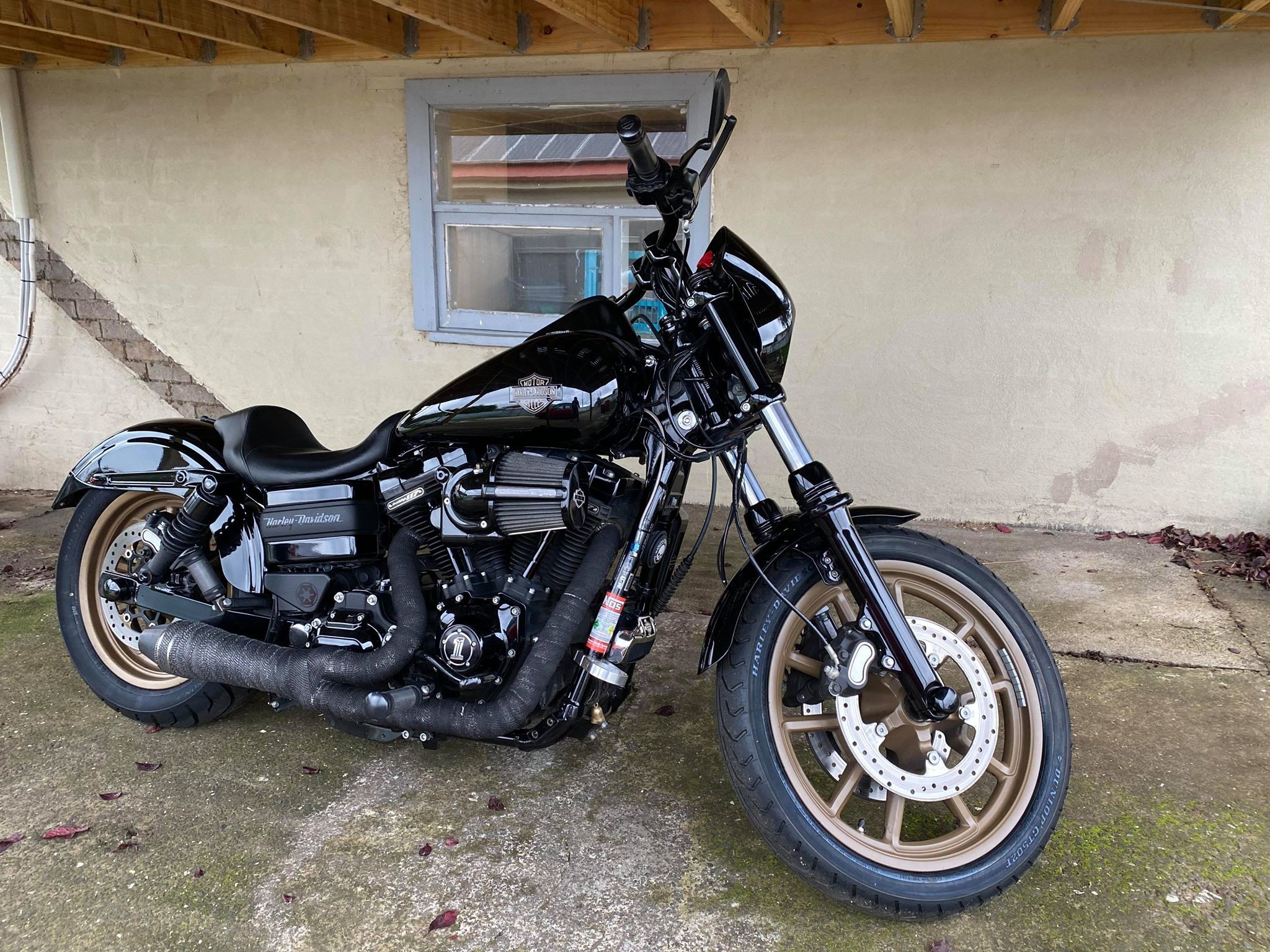 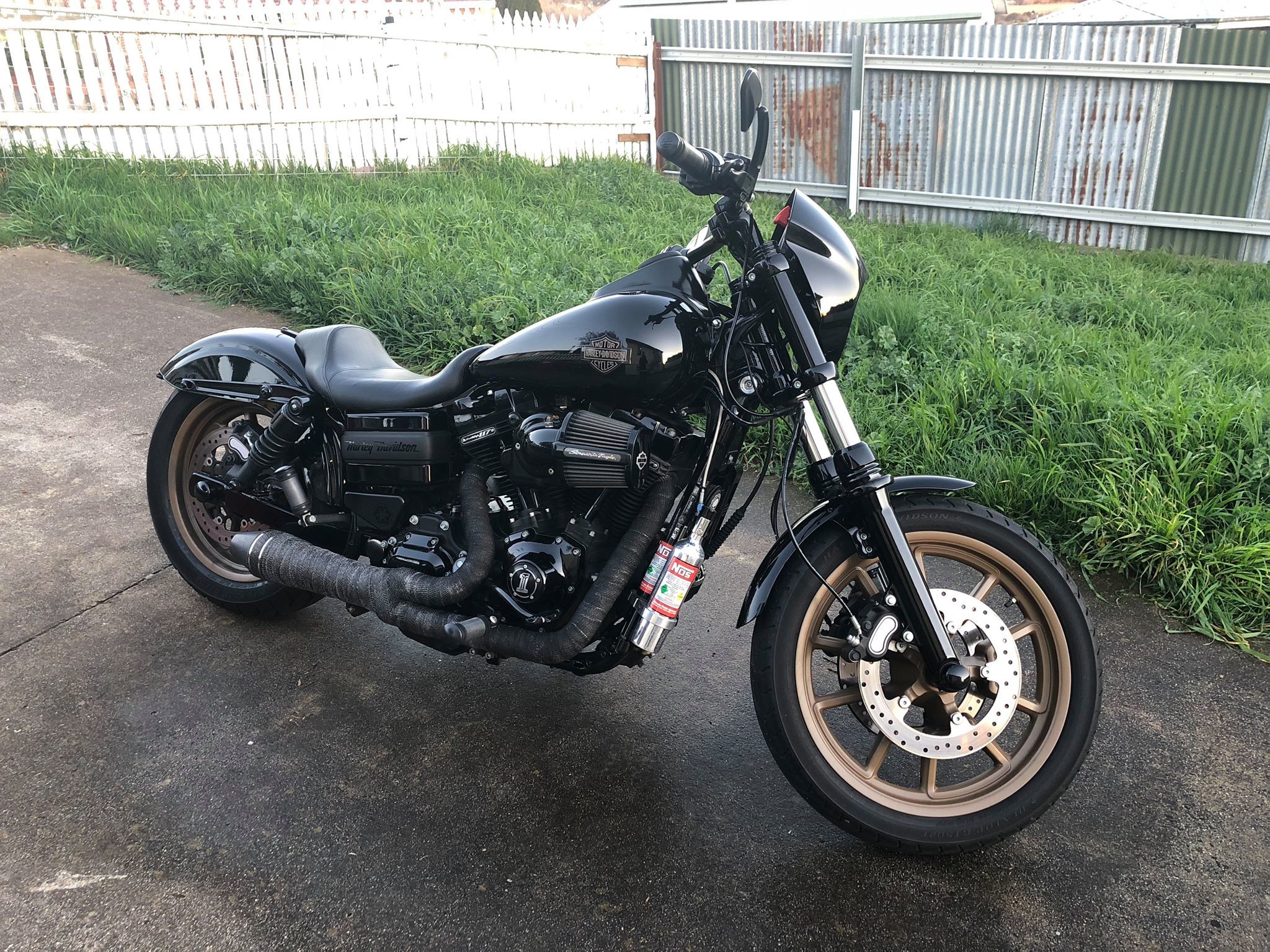 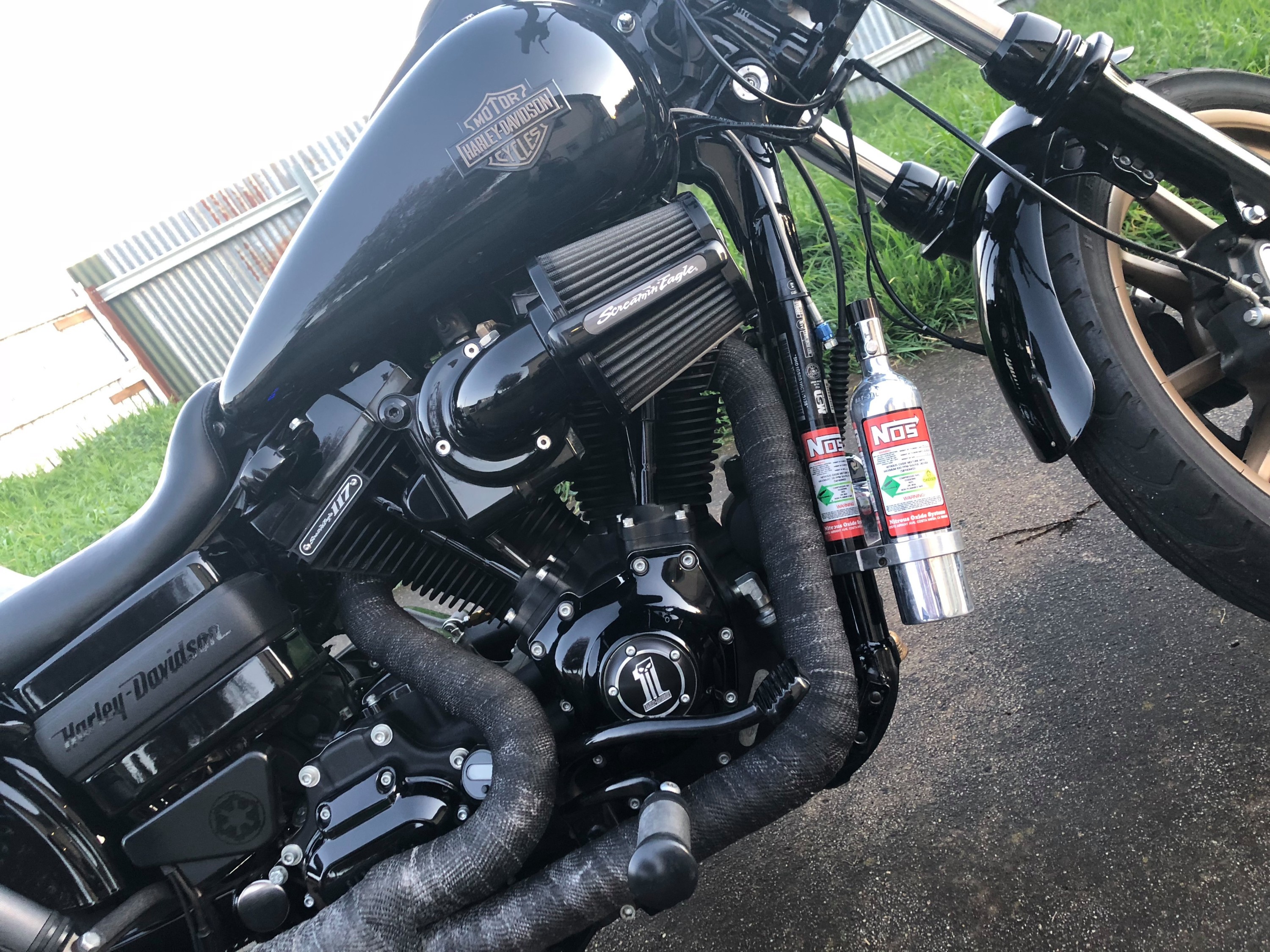 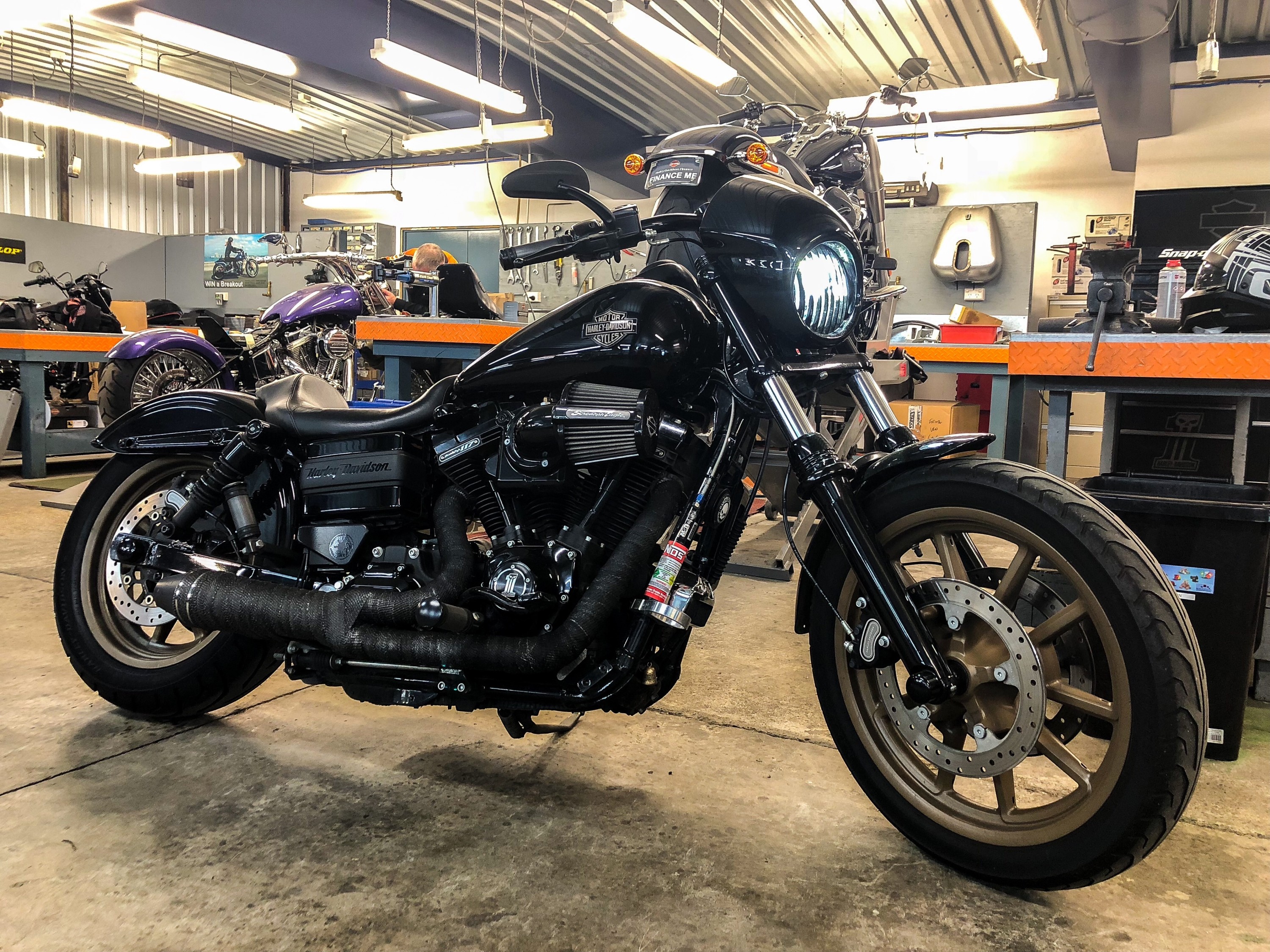 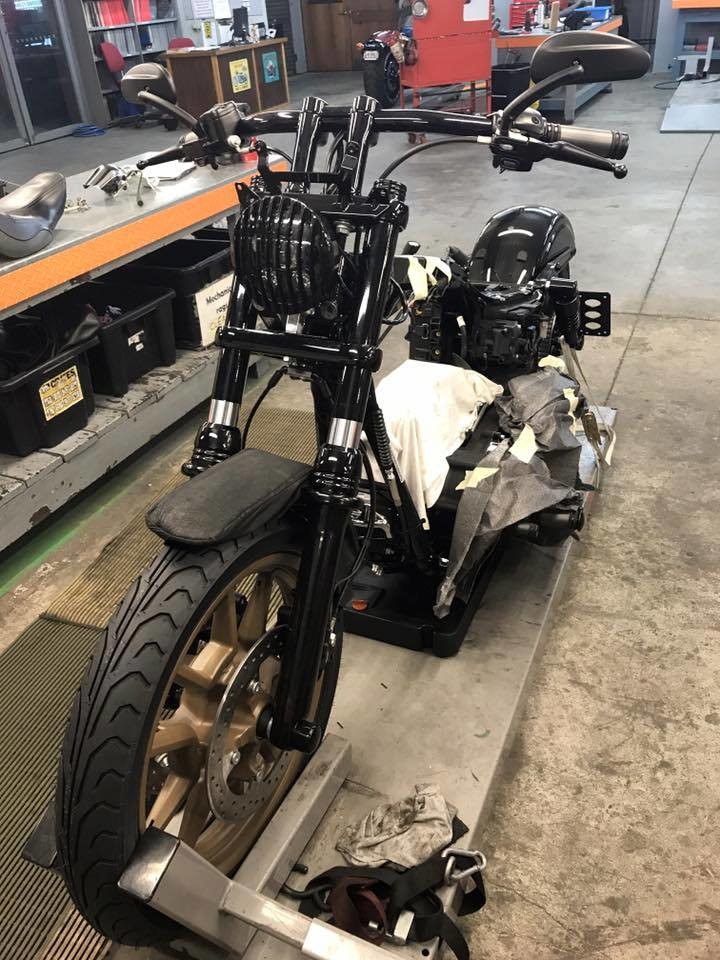 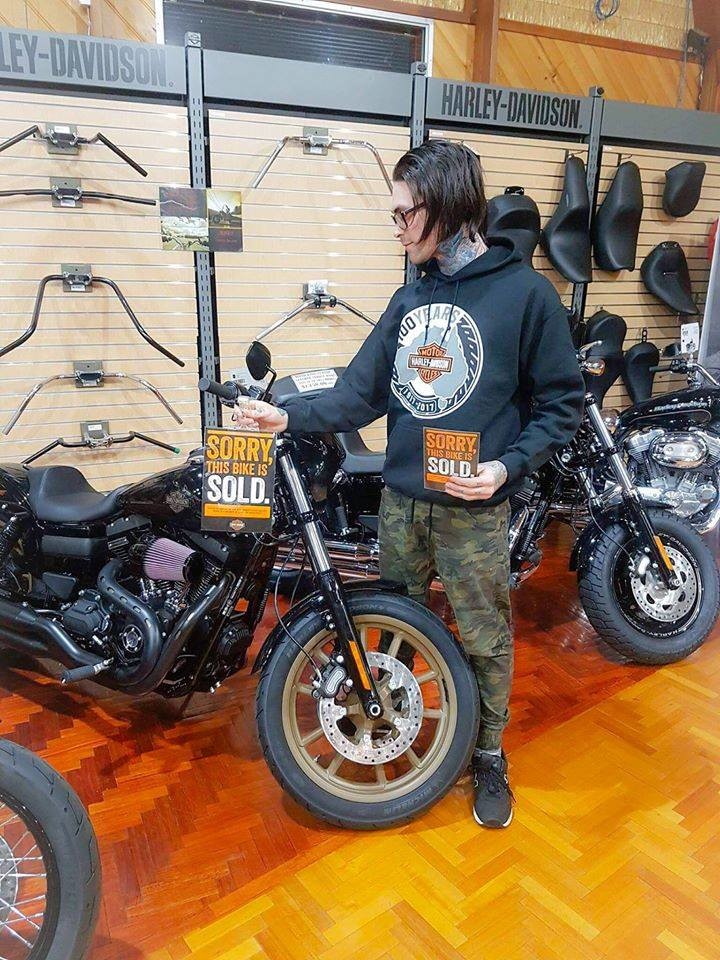 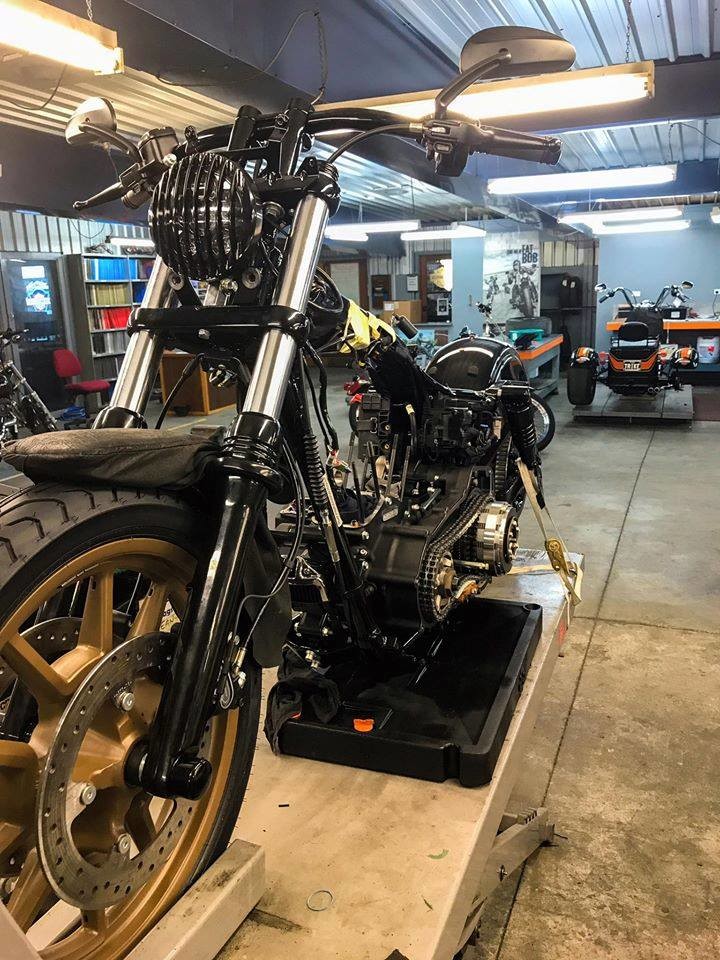 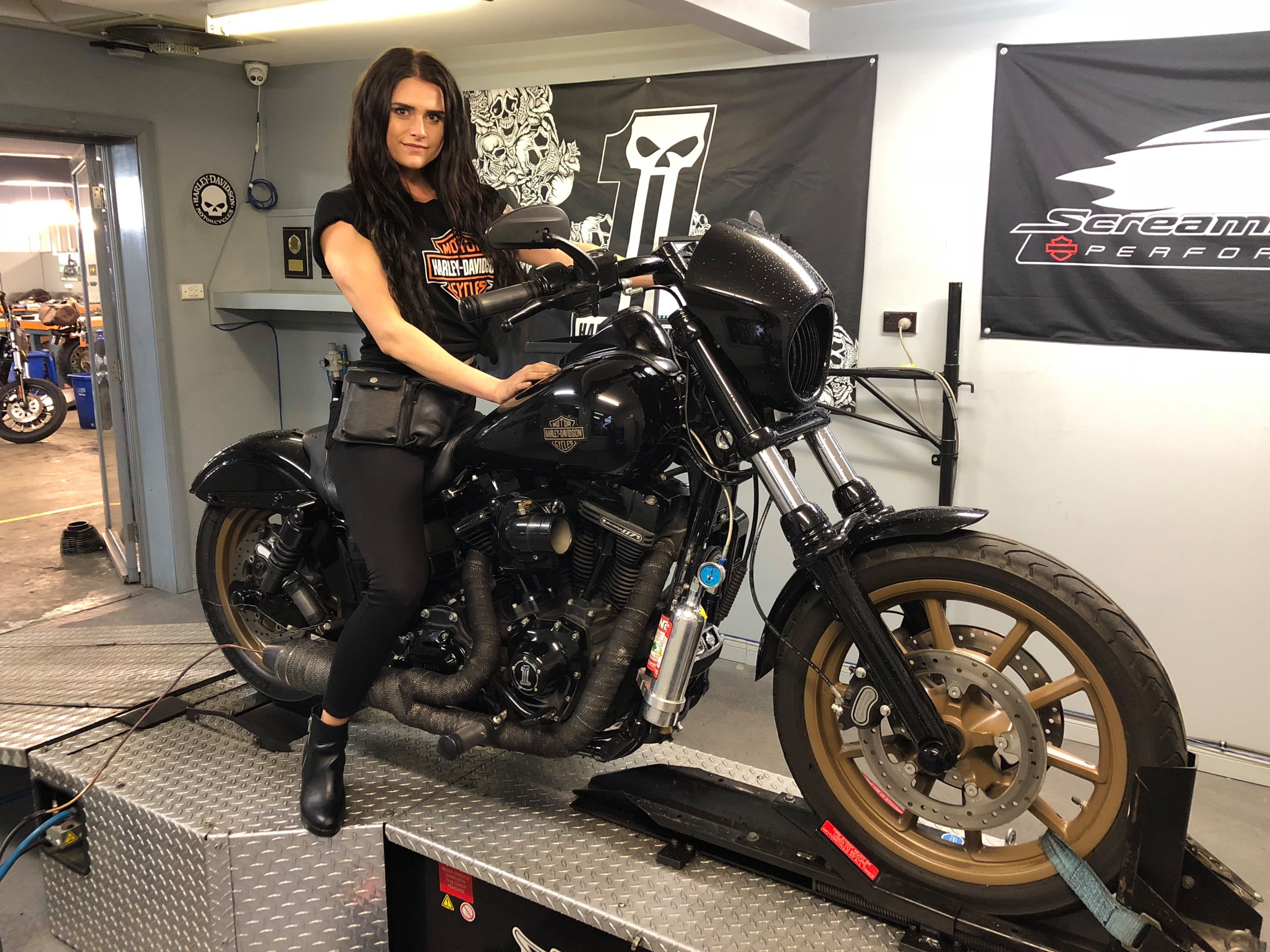 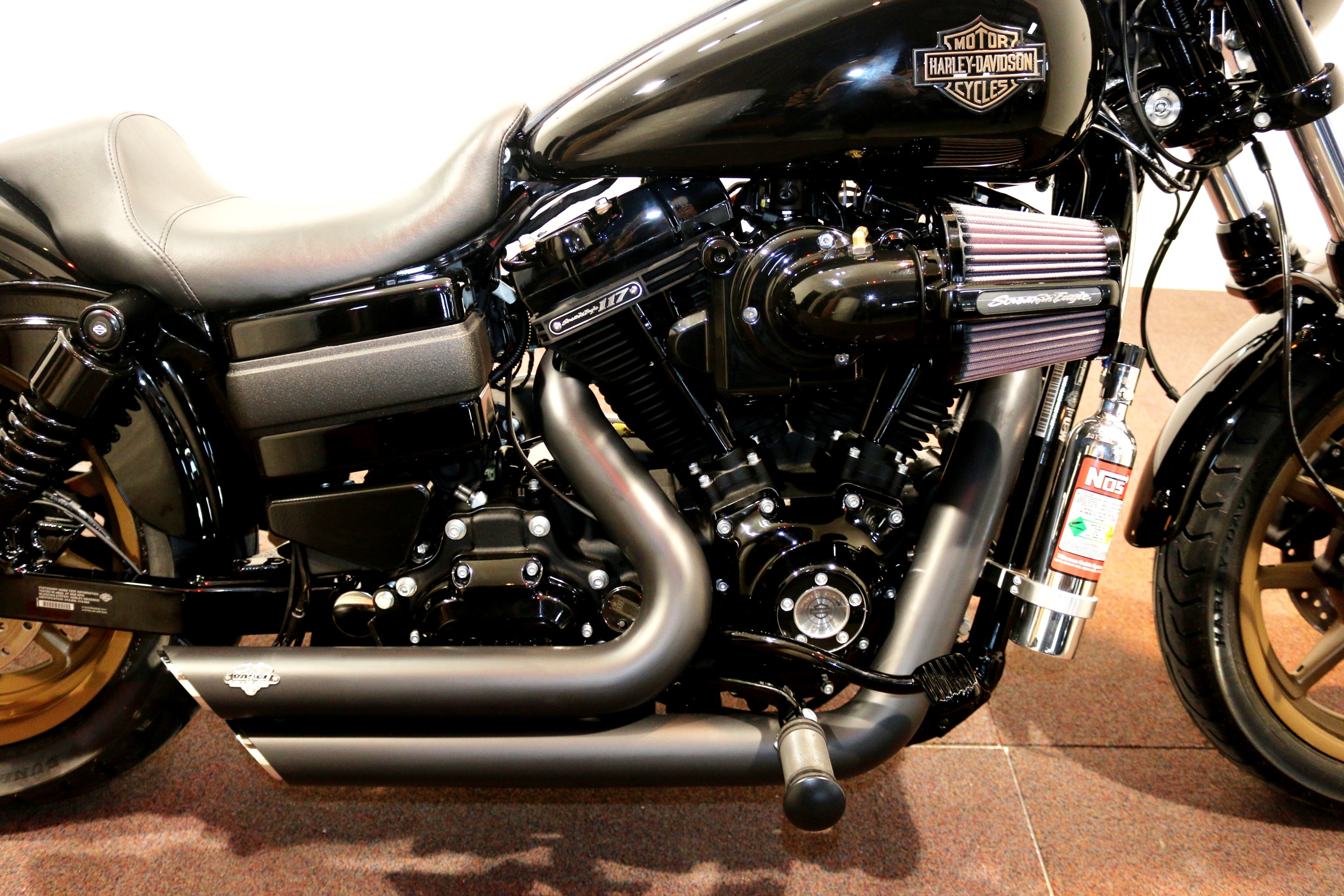 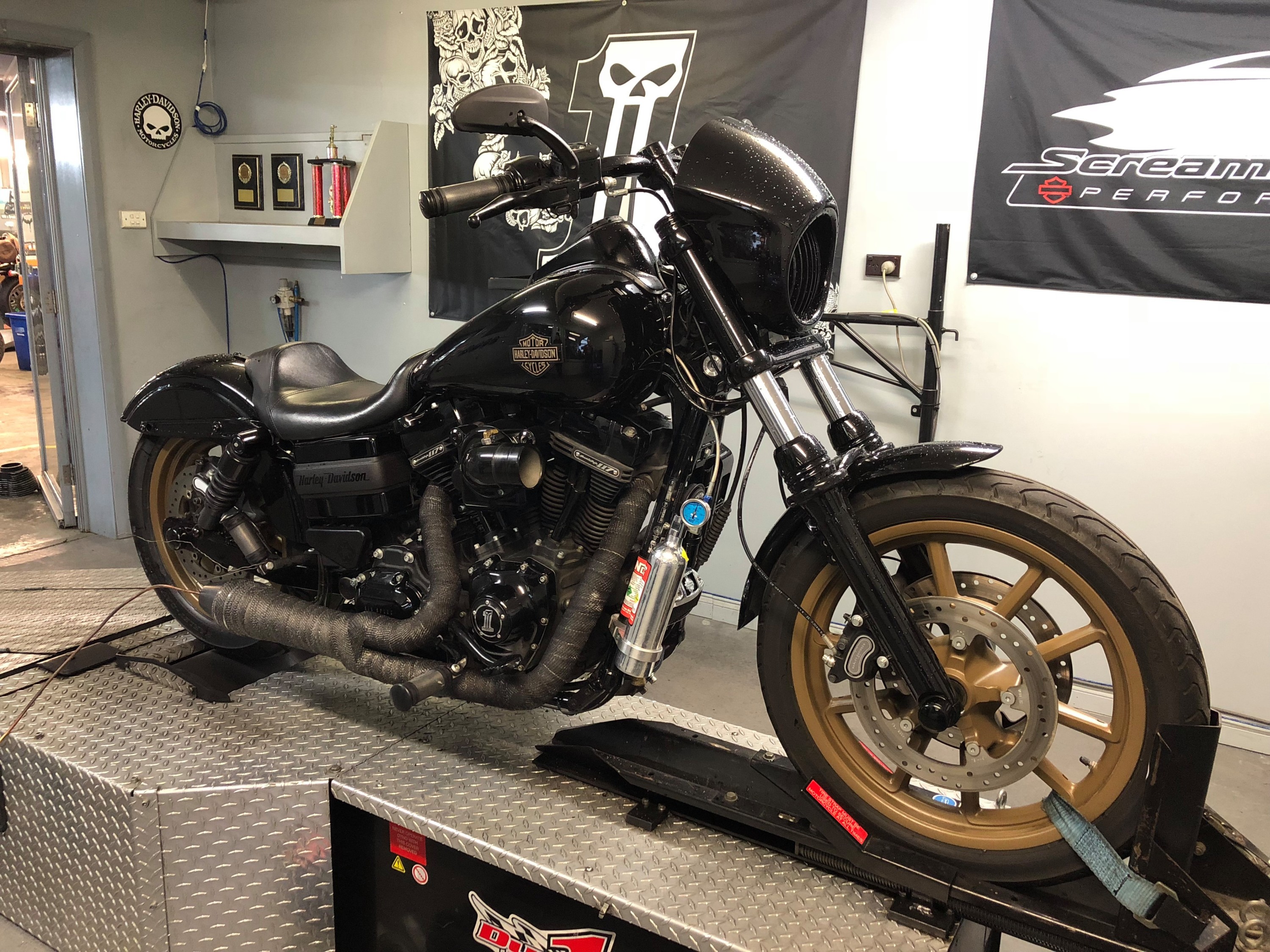